Just before Christmas I finished working on an unusual project for me. I was approached to work on a few comic pages for a Kickstarter campaign that was aiming to secure funds for a much larger project.

Scarecrow V is essentially a horror story, but a lot of the horror comes not from the usual slasher or murdery type of stuff, but instead comes from the more day to day horrors of the meat industry.

The pages were finished in time for the New Year which is when a lot of people choose to go vegan after overindulging over the holiday period. The Kickstarter campaign is coming soon so we’ll see if it gets funded.

Breaking into the sewers.

I was always a Turtles kid. I was OBSESSED with the cartoon when it played in the UK. For us they were the Teenage Mutant HERO turtles as “Ninjas” were just too goshed darn violent for the vulnerable minds of British kids. In our version they even had to edit the show so that you never saw Michelangelo’s Nunkaku as they were illegal at the time. Swords? No problem! Two sticks connected by a string? How dare you? Lock them up!!!

When the film from 1990 appeared in cinemas my Dad grudgingly took me along. I had already watched the behind the scene’s documentary and managed to record it off the TV onto VHS and watched it hundreds of times. So it was fair to say I was excited.

We came out of the cinema and I was blown away and declared it a cinematic masterpiece. Dad never let me forget that! The best film ever! I stand by that. Sure, Vanilla Ice would come along later and rap “Go ninja go ninja go!” and spoil everything, the turtles would travel in time, sure… but that first one was clean. And yes, I know you can see the actors eyes peeking out through the mouths of the turtle suits. I didn’t notice or care.

Now that I’m an adult and a full time artist, (and if I had access to the turtles’ time travel device) I would no doubt blow my younger self’s mind by telling him that one day he would actually work on the Ninja Turtles himself and find a small place in their story.

This year I nervously attended “Comics Salopia” in Shrewsbury and queued up for portfolio reviews. I’ve had some bad experiences at Comic conventions in the past. My style isn’t typical and that’s sometimes met with a resistance. But when I met Chris Ryall from IDW and he said the words “Is there any property we have that you’d be interested in working on?” there was only one word that squeaked out. “Turtles?”

It didn’t happen immediately. I had to pester them a little. At first I got the “We don’t have anything for you right now.” emails and despaired. But I kept at it. I even started to mock up my own Turtles comic to show them. Just a three page, self contained story about Raphael dreaming of an endless battle while being in a coma. I was determined to wow them! They would have no choice dammit! 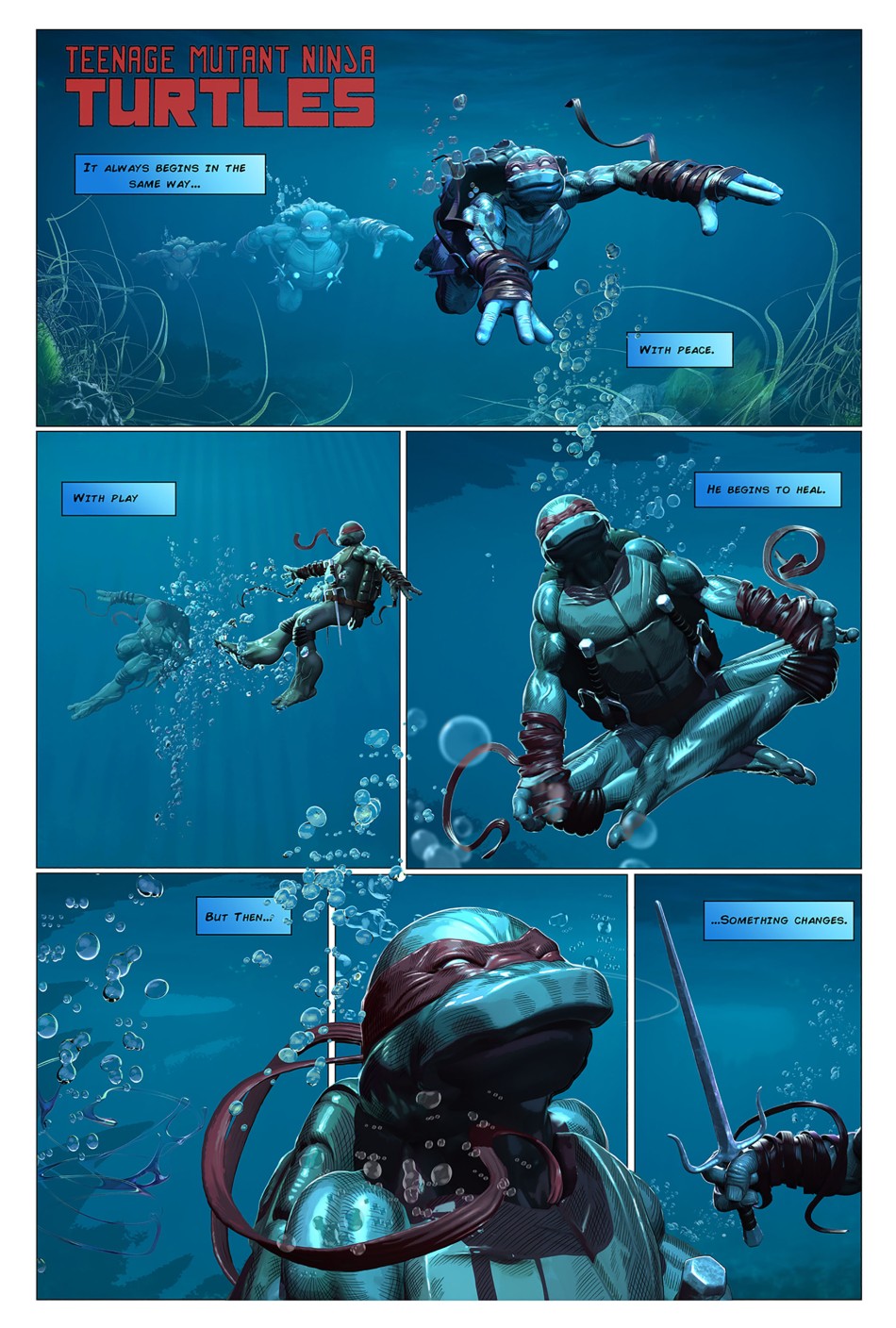 My birthday came around and on the way to get my car to drive to my birthday dinner, I found my car had been smashed to pieces when an elderly driver got confused and hit the wrong pedal. No one was hurt, but it made my birthday pretty miserable.

Then….the day after, an email arrived. The best email ever. There was a cover spot open. IDW had a Ninja Turtles cover they needed doing, and I was going to do it! My birthday has now been officially moved!

I worked very hard on it. It had to be perfect, and I am pretty proud of it. Dad would be amused, and would likely roll his eye a little too, but I’m pretty sure he’d be proud too.

Having a great year so far on the illustration front. I’ve been working on an amazing project with author Mark Morrow. Mark is putting together an amazing graphic novel adaptation of his novel “Dangerous Children”, a tale of interdimensional travel, cyborg teenagers, robotic rhinos, and wall climbing jet cycles. So plenty of scope for an illustrator like me! 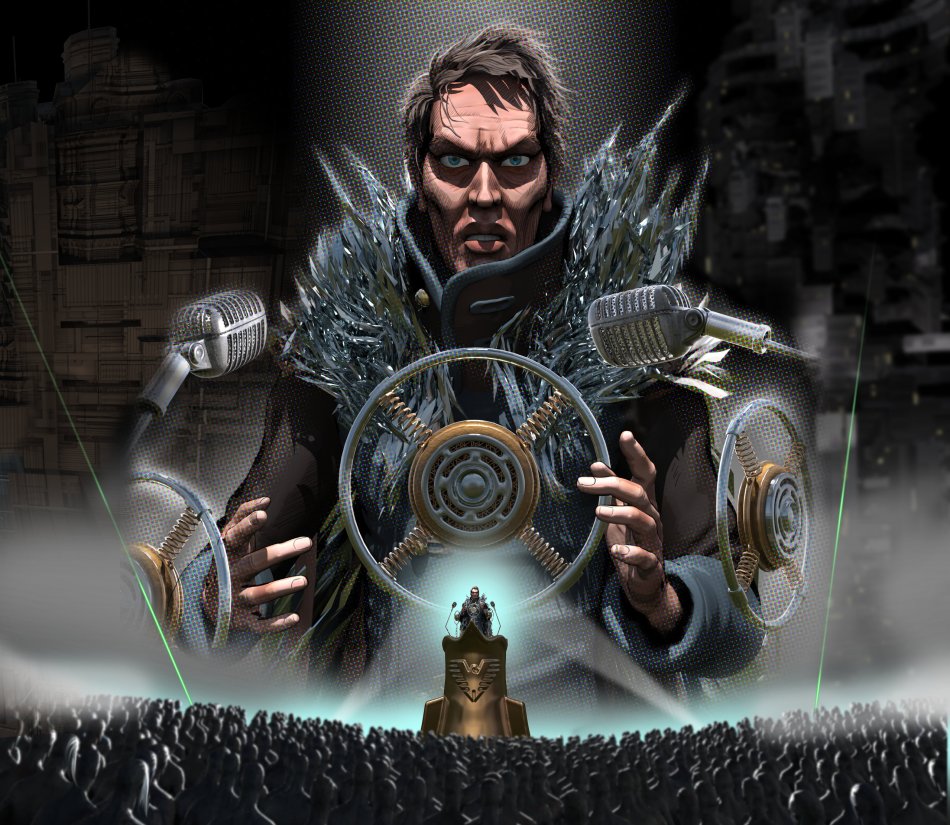 It’s a really collaborative experience as I’ve been working with Dennis Fallon and his team of story board artists, and Shari Wickstrom who provided concept art. My job is to provide the final artwork for the whole novel.

The project also has some ties with LucasFilm and Star Wars veteran Gary Rydstrom who’s been offering guidance and feedback on the project.

Being a digital artist is pretty great, but in one area it’s annoying. Not to be too mercenary, but one of the most lucrative parts of being an artist is the sale of originals. And when all your work is created in a digital space then best you can hope for is a limited edition print. But somehow even that doesn’t have the same feel as an original where you can see all the brushstrokes and imagine how the artist once stood before that very canvas just as you’re standing there now.

So I decided to find out if I still have the artistic chops to make something without the help of Photoshop, Zbrush or Painter. Just plain paper, pencils and an eraser. I thought I’d use one of my own digital images as a springboard and kind of do a retroactive original of my Mad Hatter picture. 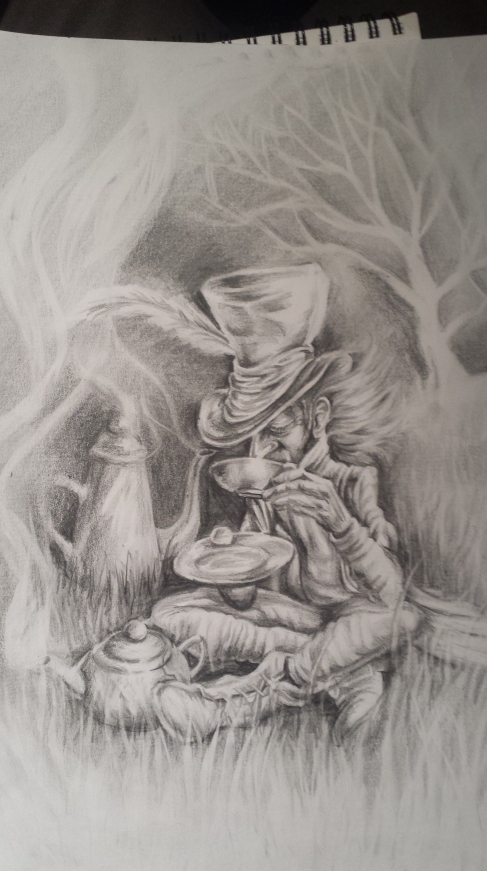 Ok, not too bad for a first attempt. I haven’t touched a pencil in about 4 years, so I’m fairly happy. I’ll keep at it and see if I can resurrect the old skills. So you never know, you might be able to pick up one of my originals some time soon. This one is destined for the States, going to my friend Suzanne. She made me a wooly hat recently, so it’s only fair that she gets the Hatter!

Don’t forget to check out my work on my other sites!